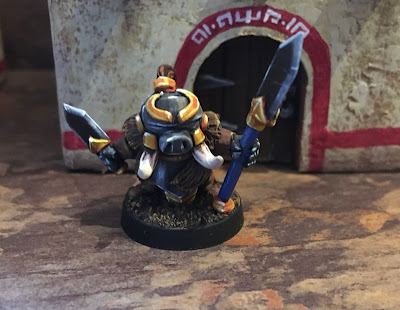 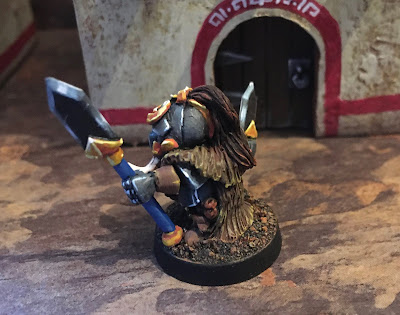 Armed with a broadsword and Boarspear, Gunnar is the third founding member of the Boar Company and is a very capable fighter and has the ability to communicate with the great tusked Totem beasts that each of the great holds raises.
He's been missing from the last few years campaign seasons as his duties as Keeper have required his attentions in the great keep of Kareth Dul but he's now completed the training of several skilled apprentices and once again ventures forth in the company of his brothers, Grimli and Flint in search of their great foe, Marik Goldhelm, the rogue sorcerer who has been a constant thorn in their side for many years.
Looking back at my old 15mm scale collection, Gunnar was the third of the characters who formed the core of the Boar Company so it was fitting for him to get an updated model and I'm really pleased with how he turned out. Perusing my old force, I also realised that I need to add a Battle Roarer and a mascot to the force as well as a second crossbow armed hunter to bring them up to full strength but expect to see much more of the Boar Company's exploits in the coming weeks!
All the best!
Posted by SpacecowSmith at 00:57

Song of Blades and Heroes 2

Leviathan 4
Song of Blades and Heroes 2